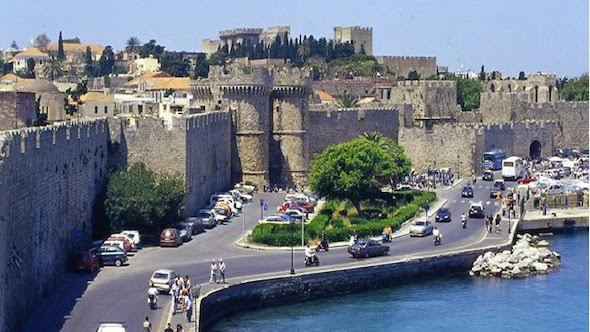 The island of Rhodes is located at the crossroads of two major sea routes of the Mediterranean between the Aegean Sea and the coast of the Middle East, as well as Cyprus and Egypt. The meeting point of three continents, it has known many civilizations.

Throughout its long history the different people who settled on Rhodes left their mark in all aspects of the island's culture: art, language, architecture. Its strategic position brought to the island great wealth and made the city of Rhodes one of the leading cities of the ancient Greek world.

The island of Rhodes belongs to the South Aegean Region. It is the largest island in the Dodecanese and the fourth in Greece after Crete, Evia and Lesvos (Lesbos). It has a long history, a rich natural environment, beautiful beaches and modern tourist facilities, elements that have for decades made it a one of the most popular tourist destinations both nationally and worldwide.

The island of Rhodes is oblong and has the shape of a spear edge. Located about 460 kilometers southeast of Athens, 380 km west of Cyprus and 18 km southwest of Turkey. Its length is 77 km, width 37 km and total area of 1,401 square kilometers (1,408,749 acres). It has 253 kilometers of coastline. The island can be described as mountainous with the highest mountains the Atavyros (1210 meters), the Artamyti (825 meters) and the Prophet Ilias (800 meters).

The population according to the latest census amounts to 117,007 inhabitants.

The island can be reached both by air or sea. Rhodes has an International Airport, "Diagoras", located in Paradisi and away from Rhodes town 14 km.

The inhabitants of Rhodes speak except from the Greek language mostly English, and many of them know other languages like German, English, Italian, Spanish, Russian and others.

The official currency is the euro.

The weather is clear on the island all year round. The maximum and minimum temperatures per month are as follow:

There are two ways to approach the island of Rhodes.

Sea Dreams is a small family shipping company who started back in 1960 with main cause the trips between Rhodes and Symi - Panormitis. Now there is also itinerary for Rhodes to Marmaris. Sea Dreams has 3 passenger conventional speed catamaran vessel. Sea Dreams offers a cruise experience as its staff has foreign language guides offering a guided tour to the passengers. It also offers some activities and entertainment options at the destinations. The purpose of Sea Dreams is to provide the passenger with the experience of the destination rather than a simple transfer.

Itineraries start in early May with the last of the season in October. Off-season itineraries are extraordinary and during festivals etc. Rhodes is the base of the company and the place where all routes start.